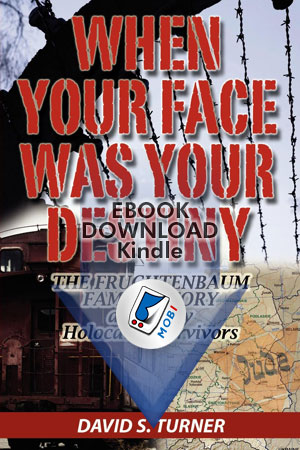 When Your Face Was Your Destiny: The Fruchtenbaum Family Story as told by Holocaust Survivors (mobi)

To read "When Your Face Was Your Destiny" is to join the harrowing journey of a family through their ordeal as Poland collapses at the start of World War II, and in a sense to experience the Holocaust personally, the way it occurred in Eastern Europe. The account has been woven together deftly by David S. Turner from the testimonies of surviving members of the extended Fruchtenbaum family. The well-honed narrative of this Holocaust story brings the reader into the lives of the Fruchtenbaum family in their hometown of Pultusk, Poland, just before the effects of World War II begin to unload like a run-away freight train. By such an excellent depicting of this close-knit, intelligent, and sensitive family during peacetime, we are quietly drawn into the picture.

Then comes the unimaginable: the brutal invasion of the Nazis as the government of Poland buckles under. Each anecdote of the ever-uncertain flight from danger to safety reveals the tortuous decisions thrust on the Fruchtenbaum family during the crises. Their most disappointing shocks are the continued outpouring of hatred from fellow countrymen as well as from those along their emigration routes, and the extreme difficulty and length of time it takes to get to safety. Ntable exceptions where people helped sacrificially are gratefully remembered. The five main family members telling their stories eventually reach Israel, and others in the family later immigrate to the United States. In the aftermath, they discuss with great pain the decisions they were forced to make, and the resulting losses. Their honest accounts are extremely moving. Appendices provide family photos and documentation. Undoubtedly, this book will help the reader understand the lasting scars that survivors carry, which can endure as spiritual roadblocks.

Author David S. Turner survived "The Blitz" on London as a boy during the 1940s, and his family supported Jewish escapees from Nazi Germany who fled to the United Kingdom. He has lived for the last twelve years in the north of Holland, not far from the former Kamp Westerbork. The care taken to describe the relationships in the family and the dynamics that gave the family strength to endure the unbearable shows that the choice of authorship is worthy. When Your Face Was Your Destiny is one more testimony to the fact that character, ingenuity, and loving relationships make a difference even during the worst of times. David S. Turner has been married to Ina Jumelet for 54 years, and both have Huguenot ancestry. They have three grown children, eight grandchildren, and two great-grandchildren.