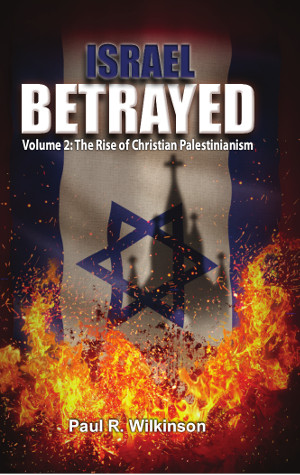 Published in two volumes Israel Betrayed is a tour de force in defense of God's eternal promises to the Jewish people. For two millennia, theologians and clergymen alike have claimed that the church has replaced Israel in the purposes of God. In volume 1, Andrew Robinson comprehensively surveyed the history of this theology. In volume 2, Paul Wilkinson charts and examines the rise of pro-Palestinianism in the church, showing how its proponents have internalized replacement theology and aligned themselves with Rome and Islam in their opposition to Israel.

Speaking for the American scene, I have observed the rise in anti-Semitism, sometimes disguised as anti-Zionism; the increase in anti-Semitic websites, which have revived old-world conspiracy theories; the denial of the Holocaust, with some people even finding a way to blame the Jews for the Shoah; and universities all across the United States demonstrating against the State of Israel. There has also been a massive spread of replacement theology (which I call "theological anti-Semitism") in many churches that were once strongly dispensational, and many Bible colleges and seminaries that once were clearly dispensational and pro-Israel have also been infested. For these reasons, I was delighted to read Israel Betrayed and decided that Ariel Ministries should publish this important work.

The first volume written by Andrew D. Robinson deals with the history of replacement theology. For decades, I have strongly felt that the rise of replacement theology‚Äîwhich later led to covenant theology (Calvinistic replacementism) and Lutheranism (Arminian replacementism)‚Äîwas not derived by an honest exegesis of the biblical text but was built on the foundations of anti-Semitism. I have seen this truth in scattered references but did not have the time to gather all the evidence. I have often encouraged seminary students, who were looking for topics for their dissertations, to pursue it, but none ever did. Pastor Robinson has accomplished this task, and I will be forever grateful for his contribution to the body of the Messiah. He was promoted to heaven not long after he put his work together, and we can praise the Lord that Andrew left us such an important and valuable work.

Robinson's research begins with the early church fathers and moves through history to the present, quoting what leaders of the church have said about the Jews. His findings show that anti-Semitism was and is not limited to Roman Catholicism, but includes the Eastern Orthodox Church and the leaders of the Protestant Reformation. Augustine, whose influence moved the church from pre-millennialism to amillennialism, derived his theology from his anti-Semitism, which could not permit a future kingdom with Israel's restoration. Therefore, I call replacement theology "theological anti-Semitism."

Robinson, thus, provides an excellent historical background to the second volume of Israel Betrayed, entitled The Rise of Christian Palestinianism. Authored by Paul R. Wilkinson (who served as Andrew's associate at Hazel Grove Full Gospel Church), the book deals with the rise of pro-Palestinianism in modern church history. We learn that Christian Palestinianism is not limited to the liberal wing of the church but extends even to the evangelical side. More and more church leaders have become clearly anti-Semitic while claiming to be "only" anti-Israel. Their anti-Israelism has moved them to support Islam and even hugging Muslim terrorists who are devoted to Israel's destruction. How quickly have such church leaders forgotten the common Islamic program: First, we kill the Saturday people, and then we come for the Sunday people!

The book is long but well worth the effort to read. It prepares the believer for the spiritual battle that is fought over Israel and the Jewish people.