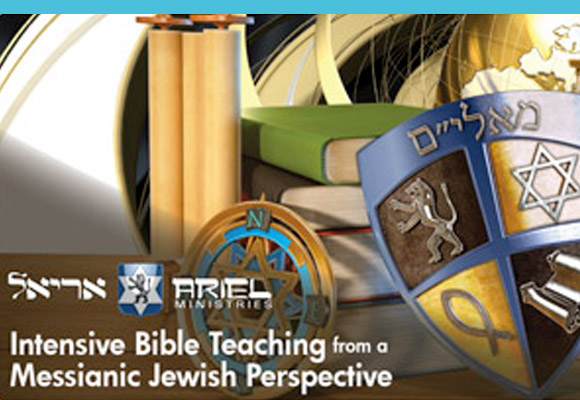 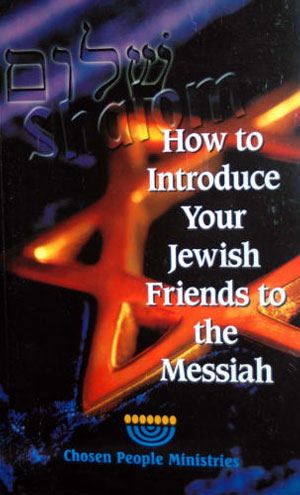 How to Introduce Your Jewish Friends to th...

How To Introduce Your Jewish Friends To The Messiah

We often find it difficult to share the Gospel with those whom we do not know well or feel we do not understand. This manual will help you reach Jewish people with the message of salvation. 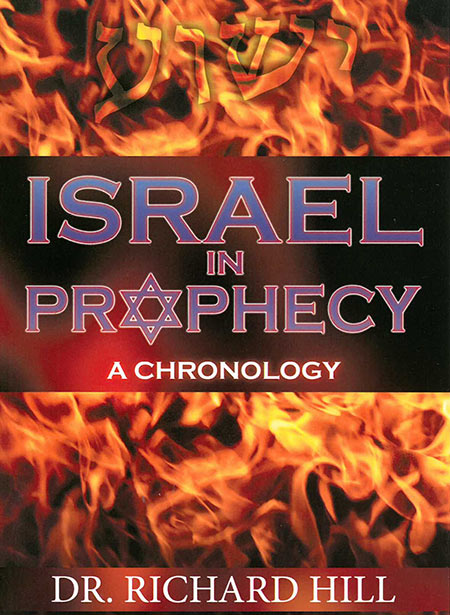 Israel In Prophecy: A Chronology

God has a prophetic plan for Israel and His chosen people in the last days.God loves the Jewish people-"the apple of His eye"-with all His heart, and by studying Israel in Prophecy: A Chronology, you'll learn that Israel is the missing link of end times prophecy.With powerful insight on the end times, Dr. Hill warns of the coming holocaust and encourages believers to share Yeshua—Jesus--with the Jewish people while praying for the peace of Jerusalem and Israel.

Whether you are of Jewish heritage, a believer of the Bible, or a follower of the Messianic Jewish movement, Dr. Hill's teaching will inspire you to discover how Israel is God's timepiece for prophecy.

Israel's Only Hope: The New Covenant

Israel's Only Hope: The New Covenant

by John B. Metzger

What is the New Covenant? In Jewish and Christian circles this subject will get a blank expression and a movement of the shoulder saying, "I don't know anything about it." Both Jewish and Christian audiences have a very inadequate understanding of this covenant. Jewish people do not understand it because they are completely focused on Rabbinic Law and do not understand that the law only judges and condemns a sinner, it does not remove sin. Whereas, the New Covenant gives everlasting life. It does what the Law was incapable of doing. Most church going Christians are aware of the term New Covenant, yet they have little understanding of the ramifications of the New Covenant to the church. The New Covenant is a Jewish Covenant, the church does not own it or possess it for themselves, it is a Jewish covenant! Yet the New Covenant literally echoes off of every page of the New Testament whether it was written by Paul, Peter, James or John.

After reading this book you will have biblical understanding but even more important a spiritual understanding of your place in the Messiah and God's fulfillment of all the eternal covenants made with Israel that He will fulfill in the Kingdom. This will give you a biblical understanding of what the Messiah of Israel did on the tree [cross]. The New Covenant is the glue that puts together the Abrahamic, Land, Davidic and New Covenants and wraps them all around the person of Yhua [Jesus] the Messiah. Come with me and follow this covenant through the Hebrew Scriptures into the New Testament. 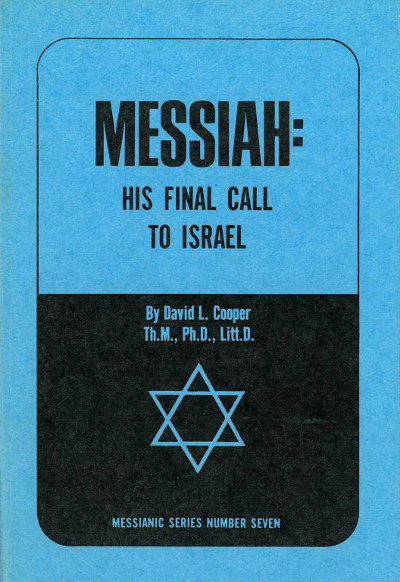 Messiah: His Final Call to Israel

The present volume is the 7th and last book of D.L. Cooper's "Messianic Series". "Messiah: His Final Call to Israel", presents the scripture teaching that Israel, upon learning the facts concerning the rejected Messiah, will repudiate the national sin and plead for Him to return-who will come to earth, life the curse from all creation, and reign in righteousness, Israel becoming the channel of world blessing.

"Messiah: His Final Call to Israel", presents the scripture teaching that Israel, upon learning the facts concerning the rejected Messiah, will repudiate the national sin and plead for Him to return-who will come to earth, life the curse from all creation, and reign in righteousness, Israel becoming the channel of world blessing.

Volume 7 of 7 of the "Messianic Series". 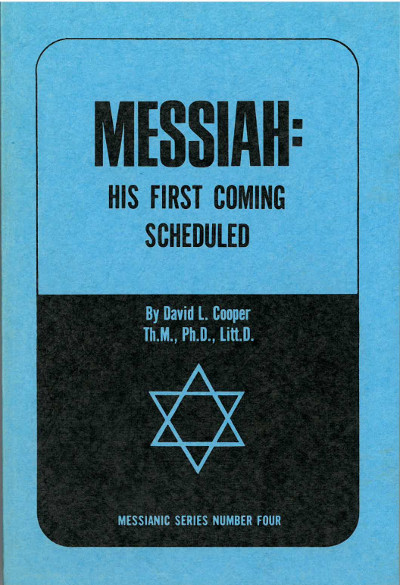 This volume is the fourth book of the "Messianic Series". This set, when completed, deals with every phase of Messiah's redemptive work. This, the fourth volume, deals with the chronological question and the time of Messiah's first appearance. More specifically, it sets forth the system of Biblical chronology beginning with Genesis, chapter 1, and which points to the time of His first coming, culminating in the year of the crucifixion of Jesus of Nazareth.

Volume 4 of 7 of the "Messianic Series". 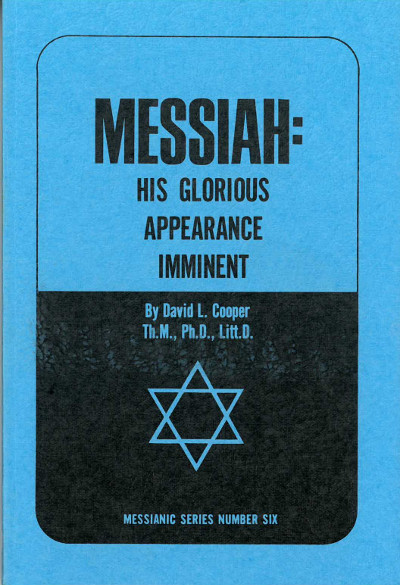 This book, "Messiah: His Glorious Appearance Imminent" is the sixth volume of the Messianic Series. This volume discusses prophecies relating to the Second Coming of Messiah, and accompanying events: the Rapture of the Church, the Great Tribulation, and the Glorious Millennial Reign of Messiah. The world is in a precarious condition. Everyone who is keeping abreast of the times realizes that the world is probably approaching the crossroads. According to statesmen, educators, and scientists, the coming decade may prove to be one of the crucial periods of all history. But those who are acquainted with the prophetic Word, while admitting the seriousness of the present time, know that in the not-distant future the Great Tribulation will burst upon the world. It behooves, therefore, the children of God to be about their Father's business. The night is coming when no man can work.

Volume 6 of 7 of the "Messianic Series". 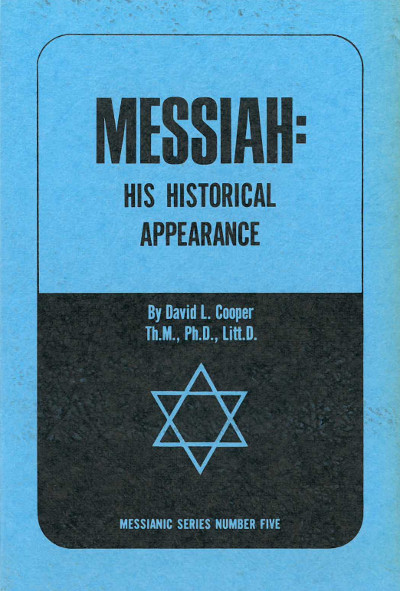 Volume 5 of 7 of the "Messianic Series". 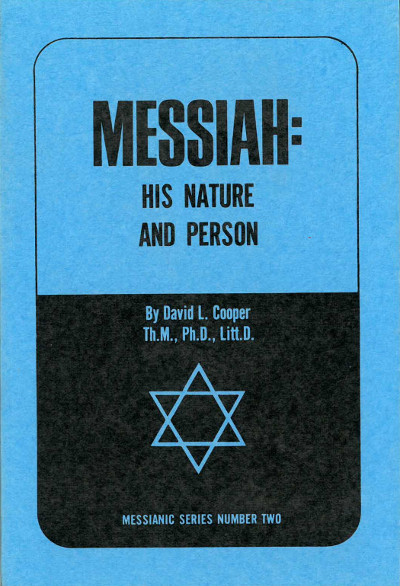 Messiah: His Nature and Person

Messiah: His Nature and Person - Vol. 2

This book is the second in the Messianic Series. In this Series, Cooper endeavors to show, within the narrow limits of the allotted space, the general teaching, at least, of the Tenach concerning God and His Messiah. This volume presents the scriptural teaching that one of the persons of the Godhead would assume human form and come to earth to execute the plan of redemption. The author shows from the original text of Tenach that Israel can never hope for cessation of her age-long distress until she returns and accepts her divine-human Messiah and Saviour. May her God own and use these pages in bringing the truth to the hearts and lives of countless numbers not only of the Chosen Race but also of all nations.

Volume 2 of 7 of the "Messianic Series". 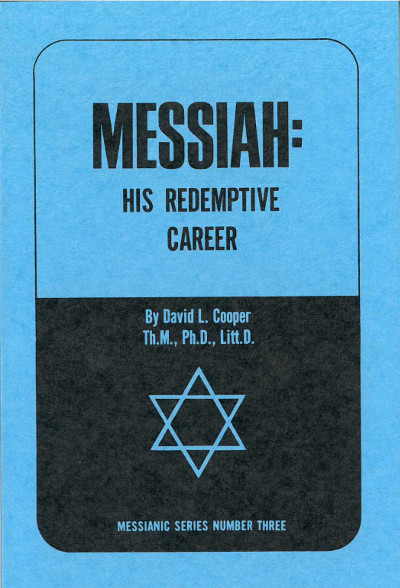 This book constitutes the third of a series that is designed to present to the Hebrew people, as well to the Gentiles, the answer to the following questions: Is the God revealed in the Hebrew Scriptures an Absolute Unity or a Triune Being? Is the Messiah of Israel simply a man of is He God incarnate? What does the Tenach (Old Testament) teach about the earthly career of Messiah? When does the Tenach say Messiah will come the first time? Each volume answers on of these most important questions. This volume deals with the two comings of the one Messiah and the interval separating these two events. During this time the rejected Messiah, having been executed, and is seated at the right hand of God the Father in glory.

Volume 3 of 7 of the "Messianic Series". 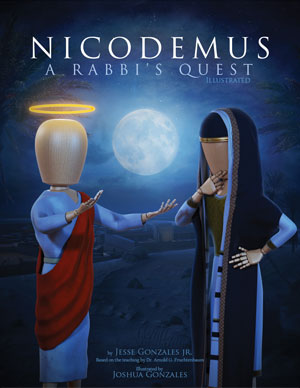 by Jesse and Joshua Gonzales

“From scholarly to simply illustrated, every issue of Illustrated Messianic Bible Studies brings to you a visually enhanced study of God's Word from a Messianic Jewish Perspective.” Written by Jesse Gonzales Jr. based on the teachings of Dr. Arnold Fruchtenbaum. Illustrated by Joshua Gonzales.

There are many New Testament passages of scripture that require a knowledge of the Jewish frame of reference to be understood, even familiar ones. One such passage is the discussion between Jesus and Nicodemus on the new birth. In this work, Jesse Gonzales provides that kind of understanding. — Arnold G. Fruchtenbaum

by Larry Collins and Dominique Lapierre

Nw a major motion picture, this remarkable classic recounts, moment by moment, the spellbinding process that gave birth to the state of Israel. Collins and Lapierre weave a brilliant tapestry of shattered hopes, fierce pride, and breathtaking valor as the Arabs, Jews, and British collide in their fight for control of Jerusalem. O Jerusalem! meticulously re-creates this historic struggle.

Collins and Lapierre penetrate the battle from the inside, exploring each party's interests, intentions, and concessions as the city of all of their dreams teeters on the brink of destruction. From the Jewish fighters and their heroic commanders to the charismatic Arab chieftain whose death in battle doomed his cause but inspired a generation of Palestinians, O Jerusalem! tells the three-dimensional story of this high-stakes, emotional conflict. Nw with a new introduction by Dominique Lapierre, O Jerusalem! remains, as ever, a towering testament to the fiery dawn of Israel and an unforgettable tale of faith and violence, of betrayal and indomitable courage.

“It reads like a whodunit, and you turn page after page to see what happens next... The pace is so swift, the drama so heightened by alternating flashes of tragedy and comedy that one has to stop frequently to catch one's breath and marvel.” — The New York Times Book Review

“A remarkable book... a history that not only clarifies the military and political events of the war but brings its human dimensions vividly to life.” — The National Observer

“A story as dramatic, as miraculous, as full of wonders as any ever told.” — The New York Times Book Review 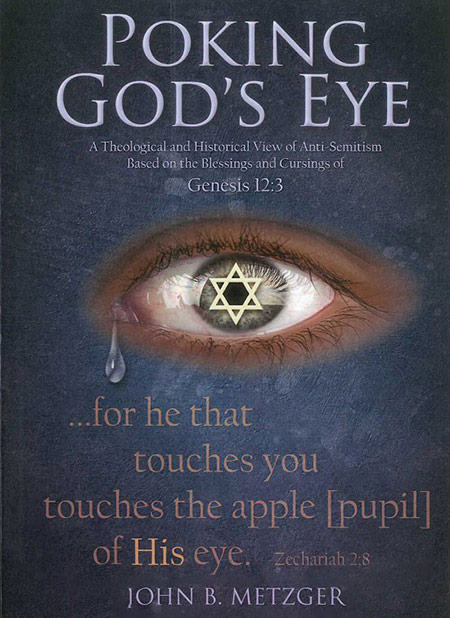 Who in the world would want to poke the God of the universe in the eye?  Ouch, that would hurt! Zechariah says, . . . for he that touches the apple [public] of His eye. God loves His people Israel and calls them the apple of His eye, a term of endearment, meaning that He loves them and protects them.

Genesis 12:3: I will bless them that bless you and curse him that curses you.

This promise is part of God's eternal covenant with Abraham.  Many people have forgotten this covenant or think that it is no longer in effect; but the Bible and human history show otherwise, as John B. Metzger points out in detail, giving detail accounts of blessings and cursese from the Bible, inter-testament times, and recent history that proves this point.  It does matter if we poke God in the eye! With discernment on what God's Word is saying, we can receive God's rich blessings instead of His cursings!